Some concepts I've developed during this journey

When I started exploring my gender, I was woefully uneducated on the area. My university had a required Gender and Sexuality course, but I had previously earned an AA which allowed me to opt out of the general requirements courses. At the time I was glad of that, now, not so much.

I definitely won't say I am now well-educated, but I do understand quite a bit more, having now experienced so much of this first-hand.

The other day I was thinking about how to best explain gender to people who have never studied it. This was perhaps foolhardy considering I have barely studied it, but here goes anyway.

For a quick refresher on the differences between sex, sexual attraction, gender identity, and gender expression, take a look at this diagram. 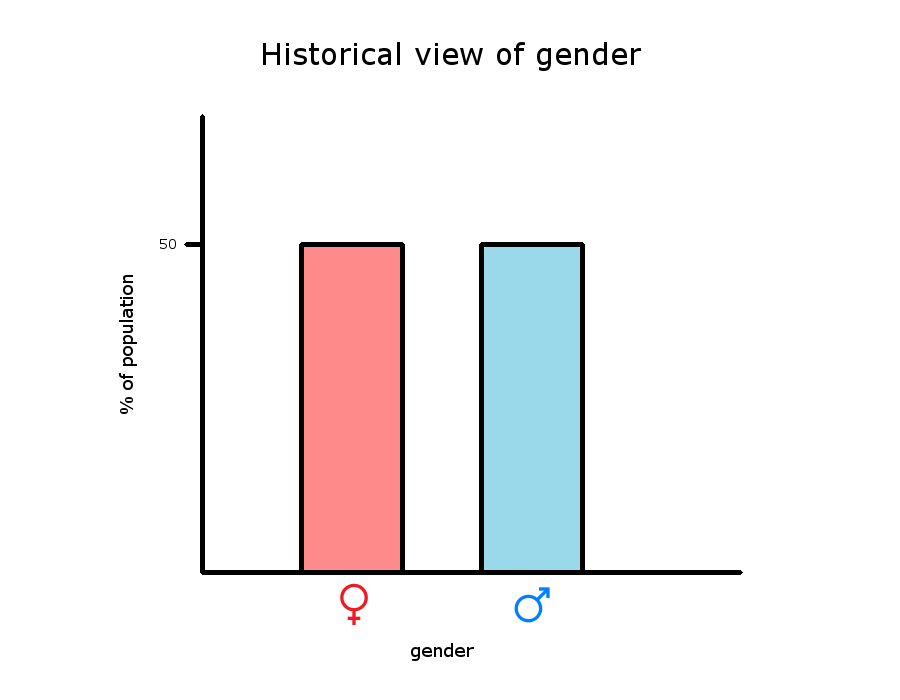 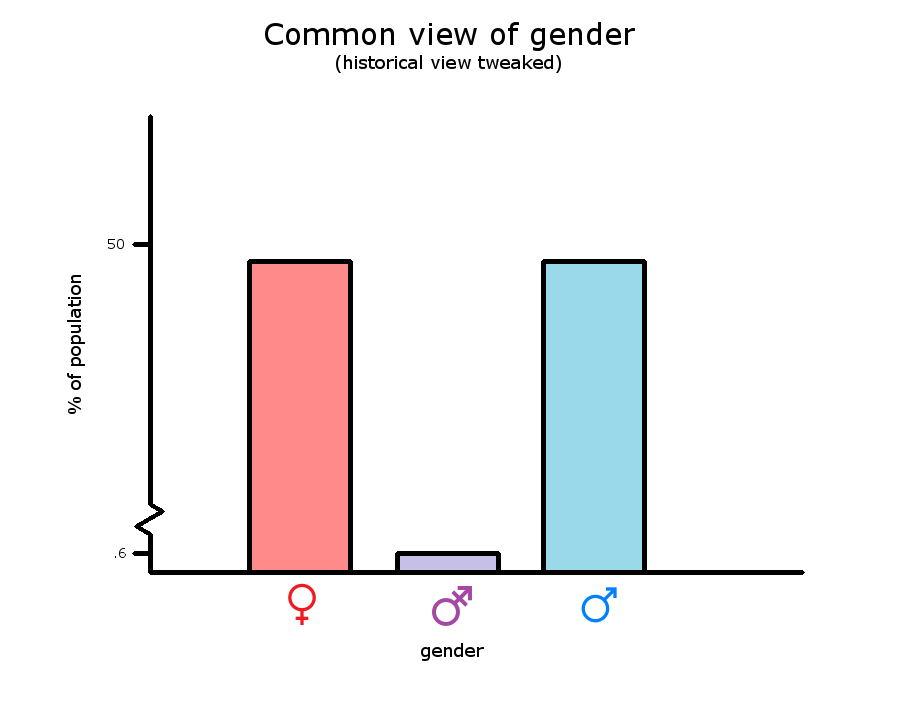 This is how I think people who have studied gender view it on a spectrum. There are no hard edges. Gender is a gradient from the completely male to the completely female. 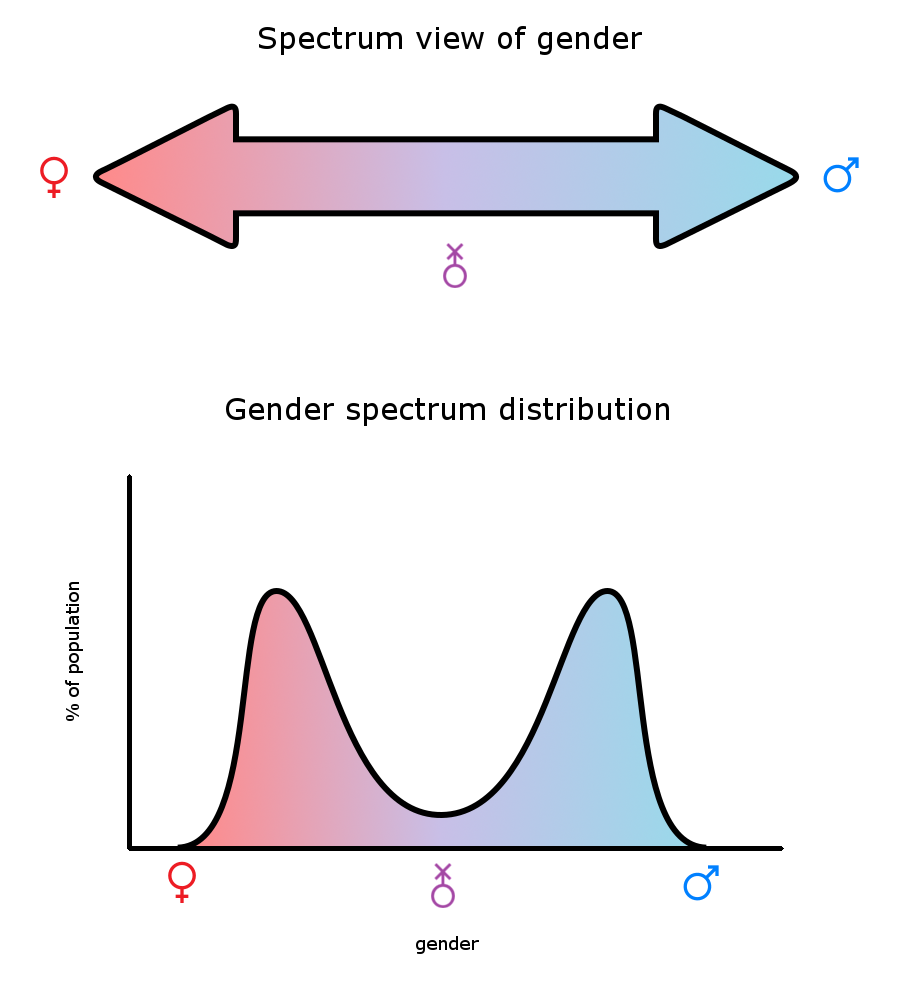 People are distributed bimodally with the majority of people landing around ~95% male or ~95% female. People at 100%[1] male would be your macho-men (e.g. Dwayne "the Rock" Johnson, Terry Crews, Hugh Jackman), and 100% female would be your girly-girls (e.g. Emma Watson, Gal Gadot, Reese Witherspoon).

Most people aren't quite as extreme as these two sets, but still fit pretty close to the cis-gendered stereotypes. They are comfortable there, secure in their perception of their gender.

Notice that transgender people aren't listed here. What's in the middle is the non-binary gender symbol. I'll come back to this omission later.

This is how I imagine gender. It is based on the mathematical concept of vectors. 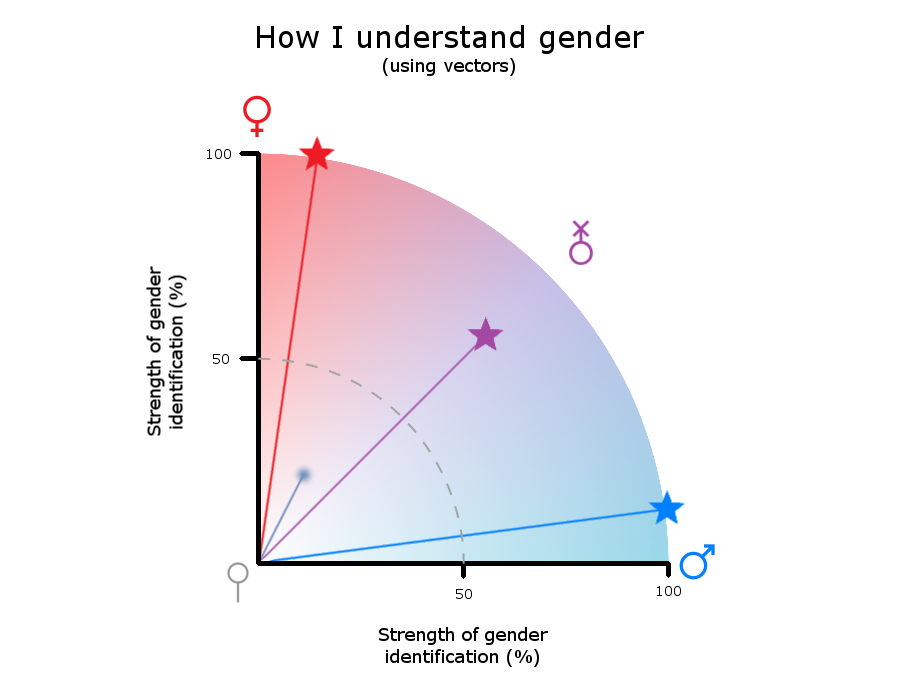 I imagine gender to be on two spectrums: male to female, and agender to strongly gendered. The first describes masculinity and femininity, and the second how strongly one feels their gender.

Draw a vector (line) from the bottom left corner to anywhere on the gradient. The more vertical that vector is, the more feminine that person is. The more horizontal, the more masculine. The length of that vector is how strongly someone feels their gender.

Drawing how I imagine the people are distributed on this model is beyond my capabilities as a 3D artist, but I marked the location of what I imagine are the high points (the tops of the hills) with the blue and red stars. These represent the majority of men and the majority of women, respectively. (NOTE: This is how I picture it, and while I think my model is more accurate than the ones in the previous images, my guesses at the distribution of people are probably pretty inaccurate.)

The whole area between these two lines represents non-binary gender. This is the "gender is on a spectrum", and while people close to the blue line will probably just consider themselves male, and people close to the red line, female, technically it would be more accurate to label them masculine non-binary and feminine non-binary. Granted, that's far too academic and cumbersome to be useful in everyday language, but I believe it is helpful to think of it that way.

The purple star is the point around which most strictly non-binary people hover. It would actually be a low point (or at most, a shallow mound), similar to the trough in the previous image. I imagine most non-cis-gender people are actually closer to one gender than the other, than they are exactly halfway between each. Note, also, that the people at the star don't feel gender quite as strongly as the average cis-gender man or woman. The vector is a little shorter.

Where I land in this model is marked by the gray-blue dot. I'm a bit more feminine than masculine, but my vector is very short, indicating that I don't feel strongly gendered one way or the other.

This model has primarily two advantages over the previous one:

In math, vectors are deceptively simple. The simplest vectors are 2-dimensional (which fits our case, as well). These have two components, typically x and y, and are written as <x, y>. If you had a vector that was 2 wide and 1 tall, it would be <2, 1>. Here's where the magic comes in. If you have two vectors, you can simply add their respective components. Consider the vectors <1, 1> and <0, 2>. The first vector points diagonally, and the second vertically. If you add them together, you get the vector <1, 3>, which is longer than the original two and is at an angle somewhere between the two.

If we assume that masculinity and femininity are two dimensions of gender, we can create vectors <0, f> for femininity and <m, 0> for masculinity. I would say I'm about 20% feminine and 15% masculine. My vectors would then be <0, 0.2> + <0.15, 0> = <0.15, 0.2>. This vector now already represents the strength at which I identify with gender. Using the Pythagorean theorem we can measure the magnitude of the vector to be 0.25 or 25%. If you look at the gray-blue dot, you can see that its length is roughly halfway to the dashed 50% line.

As I said at the end of my Coming Out post, the longer I've been living as a woman, the more female I've identified as. I would now say that my vector is around <0.15, 0.7> giving me a gender identity magnitude of ~72%. That places me just on the genderqueer side of the female red line in image above.

Astute observation, dear reader! I doff my cap. I contemplated this for a bit when designing this model. While it's true that masculinity and femininity aren't entirely opposite, they contain some elements that are. Personally, I think that someone who says they're 100% both, isn't thinking hard enough, but what do I know?

I will assert that non-binary gendered people cannot experience their gender more strongly than a strongly gendered man or woman--that is, the magnitude of their vector should not exceed 100%. In cases where they do, we can do what's called "normalizing the vector" which means keep the vector pointing exactly the same direction but shorten it to have a magnitude of 1. This is done by finding the magnitude of the offending vector (in the case of <1, 1> that magnitude is ~1.4), and dividing each component by that value (so <1 / 1.4, 1 / 1.4> ≈ <0.7, 0.7>).

Another advantage to this model is that it is easily extendible to other gender dimensions. I know that some people don't identify as male or female, but do identify strongly as something else. I haven't done enough research to know what those something elses are, but I do know they exist. How does this model handle them? We can simply add more components to our vectors. Rather than being <m, f>, we have <m, f, x>, where x represents this other gender. Rather than our 2D quarter-circle, we would have a 3D quarter-dome. All our vectors still have magnitudes between 0% and 100%, but now they have a depth in addition to a height and width. We can add as many components as we need to, and the math is still exactly the same.

So how does this model represent transgender people? Well, it really doesn't. Transgender people are merely people born with male anatomy whose gender vectors are mostly vertical and people born with female anatomy whose gender vectors are mostly horizontal. To be honest, if we accept that gender and biology are independent of each other, I think "transgender" as a gender is a bit of an antiquated term. Using it this way is the equivalent of categorically saying all men have brown hair and all women have blond hair, and then creating a label for the few cases where women are brunette and men are blond (and then lumping the two together, to boot). If gender and biology are indeed independent of each other (if strongly correlated), then why associate one with the other? Simply use the correct gender/gendered pronouns, and when necessary in a medical context, describe one's biology or anatomy.

The term "transgender" should describe people who are transitioning--or who have transitioned--away from the gender associated with their anatomy. It is helpful for describing the experiences this set of people tend to have in our society, and provides a decent point of reference in conversation, say, to distinguish between someone transitioning and someone who dresses up in drag.

A caveat: this model is useful for describing gender at a specific point in time. Gender is fluid and some people vary greatly where they land in this model at any given point in time. I also don't know enough about pangender people to know if my model can adequately describe them.